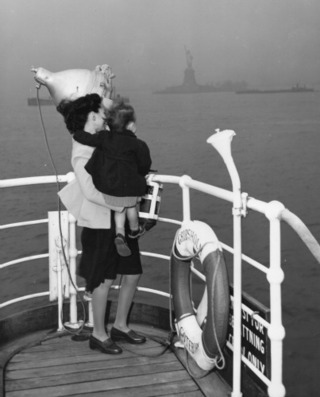 A mother and child contemplate their future as they leave the United States and are repatriated to the country of their ancestry.
When I wrote last April about the Crystal City, Texas, internment camp for German and Japanese families caught in the United States when Japan bombed Pearl Harbor, I did not have access to a book by Jan Jarboe Russell published in 2015. In The Train to Crystal City, (Scribner), Russell has added much new nformation about the camp that President Franklin Roosevelt ordered built so that he could exchange these aliens for Americans similarly caught in Germany and Japan.

Roosevelt was anxious to free American diplomats, soldiers, businessmen and others from enemy POW camps. In 1942, German, Japanese and Italian nationals in the United States who had not become U. S. citizens were arrested, taken from their families and imprisoned. Of the nationals confined, few were guilty of any crime. However, some were active in the German American Bund, a pro-Nazi organization headquartered in New York City that conducted rallies featuring swastika flags and salutes to Hitler. One 1938 meeting that hit the newsreels numbered 25,000 supporters. Fueled by war-time fears, estimates of American membership in the Bund varied wildly, from 200,000 to 8,500.Today, it is thought 3 to 9 % of German nationals belonged.

When Roosevelt’s Crystal City camp opened in December 1943, the alien families were reunited there, and camp residents were urged to agree to repatriation so they could be exchanged. The father, head of the family, made the choice. Most chose to go in order to keep their family together. That their children were born in America and knew nothing of their parents’ homeland could not be a consideration. The Crystal City camp was humanely run, with good schools and recreational activities. Most school-age children wanted to remain Americans. But only those who were of age could make their own choice.

Few Americans were aware that thousands of prisoners were being exchanged. Beginning in February 1944, the exchanges began. A total of 2,661 Americans were brought back from Europe, some of them soldiers from German POW camps. Every person, including babies, was counted, as the prisoner exchanges were strictly enforced one for one. Organized in large groups, each group was taken by train, window curtains down, to board a pre-arranged ship awaiting them in an east or west coast harbor. When the ship arrived in a European harbor, a similar German train full of Americans eager to return home awaited. The occupants traded accommodations so their journeys could proceed.

The last exchange was in January 1945. By then, Germany and Japan were much in ruin, but the repatriating fathers, who had received little war news while in camp, were steadfast in believing their homelands had won the war. Russell relays the haunting experiences of two teen-age girls, one German, one Japanese, as they struggle to exist in their devastated new countries andstruggle to return to America. A well-known journalist, Russell interviewed over 50 former internees and uncovered previously untouched public and private records to give faces to the unfortunate families who inhabited the Crystal City camp. www.janjarboerussell.com