Bringing A Piece of Home to a Place Full of Fear 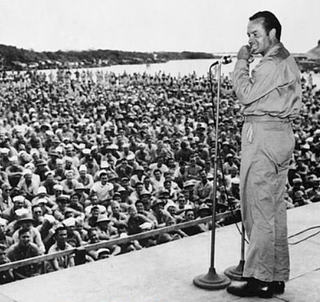 Bob Hop[e was an indefatigueable entertainer of WWII troops. He is pictured here in 1944. By US Army - US Army, Public Domain
The individual USOs, created by local townspeople, were pretty much hometown affairs. They were much-appreciated, low-key places for the troops to relax and take it easy. But professional entertainers also wanted to “do something for the boys.” Six months after the USO was formed, on Oct. 30 1941, a separate group organized the USO Camp Shows to meet the entertainment needs of the Army Camp Commanders. The chairman of the William Morris Talent Agency eventually created 702 USO Camp Show units, ranging in size from one to fifty.

All the major entertainment unions, such as the Screen Actors Guild and musicians unions, agreed to perform with little to no pay so that armed forces personnel could have live shows wherever they were. The units went when and where requested, and tours could last from three weeks to six months. In the first six months, 24 units gave 3,781 performances. By the end of the war, Camp Shows, Inc. presented 273,599 performances to over 171 million people.

The most famous outfit was called the Foxhole Circuit. It took performers overseas and into combat areas all over the world. Every theater of operations had shows; one audience, such as at an airfield, might contain 15,000 GIs. Another might be a few GIs around a jeep.

Over 7,000 artists performed. Bob Hope, Judy Garland, Gypsy Rose Lee, the Rockettes, Lily Pons, Edward G. Robinson – the list is all encompassing. Bob Hope was deservedly the most celebrated. He gave his first show in March of 1941 in California, and became renowned for his stamina, performing everywhere from North Africa to the Pacific islands. From the time he started performing for the troops until after the war, only nine of his weekly radio shows were broadcast from NBC studios. Twenty-eight entertainers lost their lives —most in plane crashes, some to illness and disease. Al Jolson lost a lung to malaria. In 1945, show curtains were “rising” 700 times a day.

The USO was discontinued in 1947. When the Korean War began, Al Jolson badgered the white House to let him go sing for the troops, who were nearly surrounded by the Chinese, Told there was no more USO and no funds, he said, "I'll pay my own way!" He did, and he put on 42 shows in 16 days. The grateful troops gave the last bridge used in their retreat Jolson's s name. The singer returned home, where he was asked to star in a movie about the USO. Before production could begin, the exhausted singer died of a heart attack.

But the USO was revived to serve troops in Viet Nam, and it continues today, operating in Afghanistan, Iraq, Kuwait and Qatan, living up to its motto: “Until Everyone Comes Home.” Read More
Be the first to comment