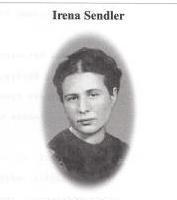 She gave 2,500 children a chance to live.
Warsaw citizen Irena Sendler was 29 years old when the Nazis took over her country. Long sympathetic with the Jewish people, she was soon creating false documents to help Jewish families. As the war progressed, she watched Jews being crowded into the Warsaw Ghetto, from which they were systematically taken o be gassed. In 1943, the Polish underground named her to head Zegota, its Jewish children’s section. She knew she faced death if caught, yet she developed a way to help.

The Germans feared typhus, so Irena obtained a special permit to enter the Ghetto to check the sewers for signs of the disease. Carrying a deep tool box, she risked placing an infant in the bottom before she returned it to her truck and drove it out of the Ghetto. She had trained her dog to bark at German guards who checked vehicles in and out, so they kept their distance, and their barking covered any outcry the babies might make. With success, she also began carrying a burlap sack for larger children. Desperate parents, knowing it was their children’s only hope, entrusted them to Irena’s care.

She dedicated herself to the effort, placing rescued children with willing Polish families and Catholic orphanages, keeping detailed lists of their original and new identities in glass jars buried in her yard to help reunite the families after the war. She organized about 30 co-workers willing to do the risky work, and before she was caught later that year, Irena's system had rescued 2,500 Jewish children. Irena was directly responsible for 400 lives saved. Tortured by the Nazis, legs and arms broken, and on her way to execution, she escaped when the underground was able to bribe German guards. She continued her work in hiding.

When peace came, she helped reunite a few parents who survived the death camps with their children, but most had died. Poland gave her several humanitarian honors and, with Israel, nominated her for the Nobel Peace Prize in 2007. It went to Al Gore. She died at 98 in 2008, one of the last living heroes who had sacrificed herself to save others from the incalculable evil of Hitler’s Holocaust.  Read More
2 Comments

Nancy,
Thank you for sharing Irena's story....She earned the Nobelin ways no one else could.
Laura

What a story, Nancy. It is amazing to me how much some people will risk to do the right thing--and how few are willing to do so. Thank you for sharing this inspiring story