Tags: Do you have a treasure in a trunk? 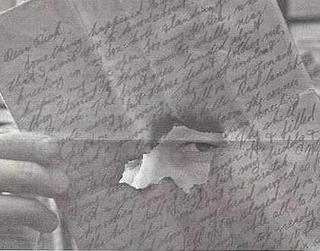 Historian and collector Andrew Carroll poses in Washington with a war letter that has a bullet hole in it.
They may be mud-splattered or gritty with sand; some are creased, crumpled, faded and dim. But they are treasures beyond imagining. Letters written by U.S. Armed Forces personnel will have a new, permanent home beginning Veterans Day, November 11, 2013, when the Center for American War Letters opens at Chapman University in Orange, California.

Beginning with the American Revolution, and including electronic mail from Iraq and Afghanistan, battlefield correspondents share what they are going through. They speak of love and longing, deep fatigue, ever-present fear and unspeakable horrors they witness. Written in numbing cold, prostrating heat, pelting rain and everlasting mud, many messages display remarkable determination and courage. Some, flecked with blood, contain the writer’s last words. The PBS program American Experience devoted a notable episode to war correspondence: See www.pbs.org/americanexperience/features.../warletters.

Private collector and author Andrew Carroll, 43, began gathering war correspondence soon after his family home burned when he was in college. Horrified at this loss of family history, he began collecting such historic correspondence, working on his own until 1998, when his letter to “Dear Abby” resulted in donation of some 15,000 letters. That number has gradually grown to a rich trove of 90,000 letters which will now be housed at Chapman in archival security, yet be available to researchers.

But Carroll wants even more. Terribly aware that more veterans die every day, Carroll pleads for people to search their attics and basements, old trunks and closets for keepsakes they might not realize they have. Author James Bradley, son of a Marine who fought in WW II, did not understand until well after his father’s death the significance of his being part of the flag raising on Iwo Jima. Letters he discovered in the attic led to his writing Flags of Our Fathers, the moving account of the men involved. Carroll urges anyone with something to share to contact The Center for American War Letters at www.chapmanuniversity.org. The web site also gives helpful information about the best ways to preserve historic letters that you wish to keep. Read More
1 Comments

This is so timely, Nancy, as I have a couple of shoe boxes of letters that my father-in-law wrote to my mother-in-law during the three years he served in the Pacific. Thank you!