He Told of Brave Men 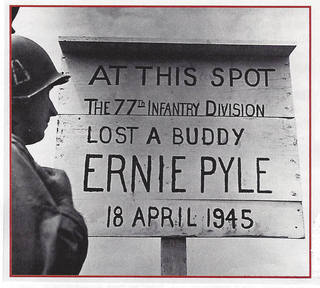 Men of the 77th Infantry Division erected this monument 2 days after Pyle's death.
If cartoonist Bill Mauldin spoke to the GIs, (see blog post Jan. 2014) it was Ernie Pyle who brought the battlefront to the home front. Before the war, Ernie had spent seven years as a roving travel writer for the Washington Daily News and the Scripps-Howard newspaper chain. His trade mark was human interest stories, told with a self-depreciating wit. But his beat and his audience widened significantly in December 1940 when he traveled to England and began covering the Battle of Britain.

Distributed by United Features, his columns, were then carried by 42 newspapers. By 1943, his numbers were up to 122 papers that reached into nine million homes. His by-line was known all over the country, but not because he wrote of campaigns and battle strategies. At 43, the smallish, grey-haired, balding writer chose to bunk with the troops and experience the war right along with them. In November of 1943, he shipped out with American troops headed for the invasion of North Africa, and began to tell about the GIs’ war.

He wrote of the GIs’ response to hungry Arab kids, of the red, clay soil that rain turned into gumbo, of the cold, the endless waiting, of the fear. He told of the boys’ hometowns, giving names and addresses. Of the pets they managed to get and keep. Of the whiskers they grew. How they kept saying, “If the folks could only see me now!” Later, when the Germans counter-attacked, he wrote of the “clank of a starting tank, the scream of a shell through the air, the ever-rising whine of fiendishness as a bomber dives….You don’t know—can never know without experiencing it—the awful feeling of being shot at by speeding enemy planes.”

His book, Here is Your war, published in 1943,concluded with the North African victory, and he wrote “That is our war, and we will carry it with us as we go on from one battleground to another until it is all over, leaving some of us behind on every beach, in every field.” Pyle moved on with the troops until there was a final victory in Europe. His account of that theater, titled Brave Men was published in 1944, and he was awarded the Pulitzer Prize for his reporting. Then he hurried to the battlefields of the Pacific.

On April 18, 1945, he was killed by enemy machine-gun fire on the island of Iegima, northeast of Okinawa. The infantry troops erected the temporary monument, above, which was later recreated in stone. A B-29 bomber was named in his honor, and his name is memorialized in scholarships, schools, libraries, a highway, park, and historic sites. He is buried in the National Memorial Cemetery of the Pacific on Oahu. He ended Brave Man with the hope, "All of us together will... reassemble our broken world into a pattern so firm and so fair that another great war cannot soon be possible." Read More
3 Comments

Thanks, Nancy, for the information about one of WW II real heroes, Ernie Pyle. We need brave people like he was to bear witness to the horrors of war.

I have enjoyed all your blogs, Nancy, especially this last one. Although I spent the wartime on the other side of the Atlantic, I remember that many of Ernie Pyle's articles were featured in British newspapers. My father joined up as soon as the war broke out, and spent the war years training troops in East Africa to fight the Japanese in Asia. He worried about the fate of thee "poor blighters" against such a well-trained enemy. My mother's war was spent as a nurse on a Mobile First Aid Unit, based in a hospital in London. They essentially did triage - "this person needs to go to the morgue, this one to the emergency room, these we can treat ourselves and send home." As for me, I spent most of the war as an evacuee, first as a school girl sent to the lovely Cathedral city of Chichester, then in a London college, evacuated to the beautiful old university city of Cambridge.My only sister was in nurses' training in Hull. one of the most heavily-bombed cities in the UK. I felt quite guilty!

Thank you for a wonderful, informative blog. It makes me sad that, despite all the efforts made, we still struggle with so much war around the world. When will mankind learn?