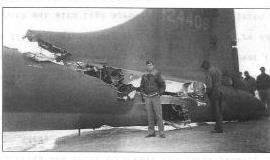 The wounded All-American and crewmen
The name stenciled on the front of the fuselage of the B-17 read "All-American, " but it was the rear of fuselage that became famous, because it was sliced nearly off by a damaged German Messerschmidt as it fell to earth. Why it didn't take the B-17 with it is astill a puzzle and a wonder today.

It was February 1, 1943. LT. Kendrick R. Bragg's plane, part of the 414th Bomb Squadron, shuddered at the impact, and the fighter broke into pieces, most of which kept falling. Some parts remained in the bomber. With the B-17's tail bouncing and swaying, Bragg fought for control as the crew used their parachute harnesses and parts of the German fighter to tie the plane together. They were without two engines, and the radios, electrical and oxygen systems were damaged. All control cables were torn away except for one single elevator cable. But they were still in the air, and Bragg continued on his bomb run over the docks of Tunis, North Africa, and released his load over the target.

But the open bomb bay doors funneled the wind through the plane to the 16 X 4- foot gash cut above and behind them. It took one of the waist gunners with it, hurling him over the hole in the plane's floor into the broken tail section, where the tail gunner was already trapped.

Four crew members spent several desperate minutes rigging ropes from parachutes and pulled the gunner back into the front part of the plane. But when they tried the same with the tail gunner, the tail flapped so hard it began to break off. His weight evidently was stabilizing the tail, so he had to stay where he was, hanging on for dear life.

Negotiating a very wide, slow turn, the pilot headed back toward Britain. Loosing altitude and speed, the bomber was attacked by two more German fighters. The gunners, two of them standing with their heads exposed through the crack, managed to drive them off. Allied P-51s met the All-American over the English channel and one of them, incredulous that it was still aloft, took a photo. They predicted a crash was imminent and requested boats be launched to pick up crewmen who parachuted.

But five parachutes were not available -- they were holding the plane together. Bragg decided since they could not all parachute, he would take the plane on in. Two and a half hours after being hit, he did just that. He waved off the ambulance that approached; they all climbed out uninjured. The tail gunner was last down the ladder and as he hit the ground so did the rear of the aircraft. Having survived the worst the Germans could throw at it, the wounded plane quickly became the target of camera lenses.

Its crew were left with an unforgettable memory and several incredible photos, one showed the plane, bearing its terrible gash, still aloft over the Channel. Navigator Harry C Nuessle sent it to his wife, labeled "Damage Courtesy of Willie Messerschmidt. R.I.P."  Read More
2 Comments

I was born in Feb 1945, so I don't have memories of WW II itself. However, my mother (who passed away when I was 2) had recipe cards with recipes from the time. I remember see one that was for boiled bologna, which is an example of the budget-conscious approach everyone had during the war.

The recipe Sis makes in Not to be Forgiven is from a booklet for housewives of the time. The mention of "victory patty," made of carrots, potatoes and ground liver, which she holds her nose in order to swallow, was also published then. Molasses was often used for sweetening. 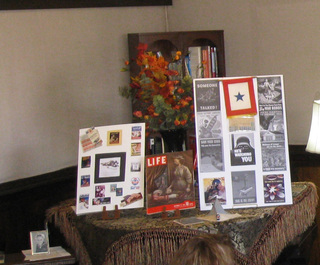