"Get in the Scrap" 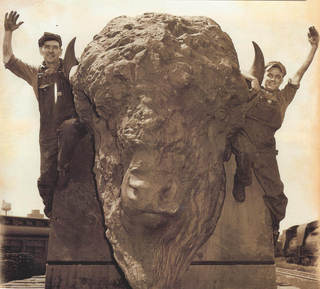 The buffalo head that long-welcomed travelers on the Union Pacific RR to Nebraska takes a last ride to the scrap pile.
Today we collect cans to save resources and the atmosphere. In 1942, we collected cans to save soldiers’ lives and our democracy.

Scrap metal drives were not a whimsical idea invented to get American citizens involved in the war effort. They were created in the summer of 1942 to keep the nation’s newly organized “war machine” from running on empty. War equipment requires steel; fifty percent of the molten steel needed for trucks, tanks, ships, planes and shells needed to be made up of scrap metal. By June, the steel mills scrap bins were empty. Production slowed – even stopped at some plants.

Everyone knew of the critical shortage. Newspapers, including Henry Doorly’s Omaha World Herald, were writing articles and editorials about it. The War Department warned that we would lose the war without more armaments. But, Doorly fretted to his wife Dorothy, nothing was happening! “Well, Henry,” she said, “What are you doing about it?” After some thought, what he did was sponsor a contest: a widely publicized, three-week, state-wide challenge to find out which community could collect the most scrap metal on a per-person basis.

Nebraskans got to work. They emptied basements and garages and alleys, scoured fields for old farm equipment, searched rural areas by plane, dragged Civil War cannons out of parks, sacrificed bikes and trikes, washtubs and roasters, pumps and wheels and pails. Corporations joined in and let some employees work full-time collecting scrap. The Burlington and Union Pacific Railroads competed, with the UP giving up a huge buffalo head that had welcomed travelers crossing the Missouri River to Nebraska since 1888. Daily tallies sparked competition; drivers gave up their car bumpers, brides asked guests to bring gifts of old metal. When it was over, Nebraska’s 1.3 million people had collected 67,000 tons of scrap metal. Rural, isolated Grant County, whose patriotic citizens turned in 637 pounds for each man, woman and child, won the day, but the important winner was the war effort.

The War Department took notice. Doorly was invited to Washington, D.C., and in September the “Nebraska Plan” went national. U.S. citizens gathered 5 million tons in three weeks. The steel mills went back to work.and equipment rolled off the assembly lines. These drives continued through most of the war, as the defense industry, running day and night, turned people’s castoffs and keepsakes into weapons that eventually enabled our troops to win the war.

I remember the scenes in "Not to Be Forgiven" when the scrap metal drive was on. Our attempts to recycle surely were born in those more desperate times. And both then and now, the team feeling added to individual pride.

A wonderful piece, Nancy. It was a time when everyone helped, everyone had something at stake. It was a time of clarity and sacrifice by everyone. Thanks for both the reminder in your book and the blog.

As you stress, recycling in the war years was motivated by necessity. Today, the link between our survival and recycling is much less clear, and so we don't go to the historic lengths you describe in Nebraska. It was a great story!