A Matter of Honor

Tags: How can a for be a friend? 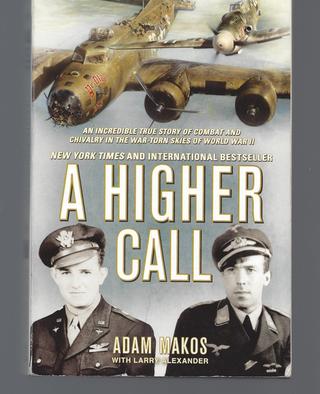 This book by Adam Makos is recommended for a different perspective on WW II. Among the places it is available are at Amazon, Barnes and Nobel, and Tattered Cover.
Some war stories are so incredible you know they have to be true. They could not be made up. When this event happened, it was so unbelievable officers taking reports would not credit it. And when they did grudgingly acknowledge it, they forbid Pilot Charlie Brown and the crew of the B-17 bomber Ye Olde Pub who experienced it, to ell anyone else it happened.

The book is not new. It was published in 2012, so many other people know about it. But I did not, and you may not have either. The title is A Higher Call, and it is by author Adam Makos, who spent eight years in research and interviews.

It will renew your faith in human nature and give you a new perspective on German airmen.

Early in World War II, German fighter pilots held the top of the hill, lionized by the German population, given all the best of food, drink and women. They dominated the skies during Hitler’s conquest of North Africa, gleefully chalking up their “kills,” earning Iron Crosses when they got their quota. As 1943 progressed, the Allies were gaining strength, but for months bitter fighting went on, and no one knew what the outcome might be. There was desperation on both sides. American bombers from England were blasting German factories, railroads and airfields. German fighters rose to protect them, mowing as many as 60 bombers —600 men— out of one flight.

On Dec. 20, 1943, after a raid on Bremen, German ace Lt. Franz Stigler came upon Charlie Brown’s B-17 bomber, with two engines out, unable to keep up with his returning squadron—scarcely able to stay in the air. It was limping north toward the German coast as it sought safety. With a large hole in the nose cone, the radio room laid wide open, the fuselage and tail full of holes, and the left stabilizer reduced to a nub, it was an easy target. Stigler had his finger on the trigger, ready to finish it off. He could clearly see the crew inside, battered and bloody, the living caring for the wounded. They looked at him with fear, defiance, resignation. And he did nothing. Then he did more.

He not only failed to down his enemy’s bomber, he placed his BF-109 fighter so close to the American plane that when they passed over Germany’s vaunted coastline gunners, not one fired, afraid to take the enemy down. It was a treasonous act. He opened himself to court-martial and death. Yet he escorted Ye Olde Pub for ten minutes, until it was well out to sea. Then he saluted pilot Brown and crew and peeled away.

Brown hardly had time to notice Stigler’s presence. He concentrated on wrestling The Pub across the English Channel; it was skimming the treetops by the time he maded the coast. But afterward, the incident haunted him for years. The Higher Call relates the lives of these two pilots, their contact during WW II, and the journey they took after to finally become friends.

I highly recommend this story of a man who felt a higher call.