Tags: It's Meatless Tuesday, There's a war on, you know! 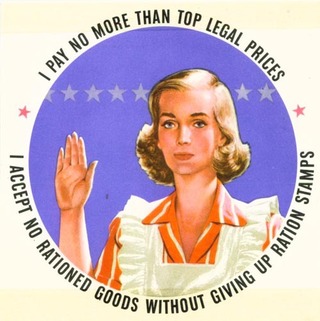 Another poster, portraying a GI, urged "Do with less, so they'll have enough." The great majority of Americans voluntarily followed the rules.
In 1941, 97% of the country's supply of raw rubber came from the Philippine Islands in the western Pacific. The Japanese invaded the Philippines on Dec. 1, and bombed Pearl Harbor on Dec.7. On Dec. 11th, the U S government announced that rubber was rationed; civilians could no longer buy tires. What's more, if anyone owned more than five tires, they were to turn the extras over to their just-created, 3-person, volunteer Tire Ration Board for a token payment.

On Jan. 1, 1942, the War Production Board ordered an end to new car production for civilians. Automobile plants turned to producing tanks, aircraft and weapons. By June, production of bicycles, typewriters, radios, refrigerators, washing and sewing machines, vacuums, office furniture and alarm clocks ceased. Drivers had to paste a gasoline sticker on their windshield. Most people got "A" stickers, allowing 3-4 gals a week. "B," with its 8 gallons weekly, went to the military industry; "C" to doctors and essential workers; "T" to truckers and "X" to civil defense, police, firemen and ministers. The nation-wide Victory Speed Limit was set at 35 miles per hour.

By then, citizens had received War Ration Book No. 1. Each family member had a book full of small red or blue stamps the grocer required before they could purchase the half pound of sugar they were allowed each week. Red stamps were required for meat, cheese, milk, lard, shortening, oil, butter (which disappeared) and margarine,(which was white and had to be hand-colored with a capsule of garish yellow dye). Losses of Brazilian cargo ships to Nazi U-boats made coffee stamps necessary in November of 1942. One pound had to last five weeks. In 1943, shoppers had to present blue stamps for all canned, bottled, frozen, and dried foods . By now, ration boards were meeting nightly to hear emergency appeals.

Of course having the stamps did not mean products were on the shelves. Grocers took to putting up signs advising, "Blame Hitler, Tojo and Benito, not us!" It was early 1943 when shoes were rationed. There was one stamp #17 for each person. Adults half-soled, parents handed down, and more than one kid patched a hole with cardboard until another stamp became useable.

In that day of pin curls, bobby pins disappeared, as did nylon stockings. Cigarettes, candy, gum, safety pins, elastic, garden hose, batteries, flashlights, fountain pens, tools, toys, and toilet paper were scarce. Hoarders were subject to fines or jail; they were few. Most people decided to grin and bear it "for the duration," which lasted into 1946 . People celebrated when goods began to come back on the market, and many people tucked their Ration Book No 4 away for a remembrance, and for an example for grandchildren, born into an age of excess, how the American people can respond when their country needs them. Read More
1 Comments

Your blog is always so full of fascinating information. You are a great historian, and it shows.