Volunteers Create a Touch of Home

Tags: Good Food, Good Company, A Place to let down 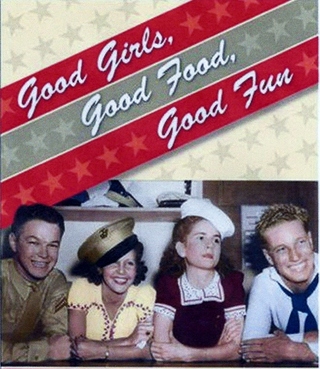 Servicemen could also get help with writing letters, play ping pong, and at some clubs, make a record holding a three-minute message to their family.
In Not to be Forgiven, it's 1942 and Sis Greggory is making paper chains to drape the Hiram's Spring's USO Christmas tree. She was only one of 1.5 million volunteers eager to do whatever they could to brighten what was becoming the G Is favorite place to while away off-duty hours.

President Franklin Roosevelt created the United Service Organizations for National Defense as a private, non-profit organization on Feb. 4, 1941, even before Pearl Harbor, foreseeing that US troops would require good morale, and believing private citizens could do a better job creating it than the Defense Department. After Pearl Harbor, with army bases and air fields a-building around the country, citizens were quick to see the need for a place the troops could relax and have fun in off-duty hours.

In Hiram Springs, the community cleared out the empty Piggly Wiggly grocery store on Main Street and brought in couches, easy chairs and tables for snacks, card games and puzzles. The Methodist church donated a piano, and someone found a usable jukebox. Soon “Boogie Woogie,”and “Don’t Sit Under the Apple Tree,” filled the air. Food, of course, was a necessity for a good time; soft drinks, sandwiches, cakes and cookies were needed on a daily basis. Intoxicants were forbidden in USO clubs. Books, magazines and games helped fill the time. All services possible were offered free; candy, cigarettes and food were sold as in the Army’s own Post Exchanges.

And while the hostess in charge was a matronly sort, a corps of high school and working girls over 16, each vetted by at least two members of the community, were called Junior Hostesses and gladly made themselves available to dance, play games or just talk with the servicemen. Each hostess was required to take one course every year dealing with the philosophy of the USO, charm, etiquette, cosmetics, and proper clothing (no slacks) : They were to be “ladies at all times.” They could not refuse to dance with any serviceman unless he was being “ungentlemanly.” Each hostess was required to work a minimum of two hours a week. Those who fulfilled the requirement from 1941-1945 earned 490 hours. Most put in many more.

More than 3,000 communities established such centers, run by USO Council /Committees. There also were Mobile USOs which served isolated outposts. They took a truck equipped with a power generator, PA system and microphones, a turntable and records, motion pictures, stationery and refreshments to men stationed in sparsely populated areas. Sometimes carloads of Junior Hostesses, chaperoned by Senior Hostesses, arrived for special parties or dances. Hostesses were not allowed to date men they met at the USO, though correspondence with them was encouraged.

The well-known USO Camp Shows, organized by a different division on Oct. 30, 1941, soon had 24 separate show units, headlined by Hollywood stars, entertaining the troops. They continue today. Look for more about this vast volunteer effort next month.  Read More
1 Comments

When I read about the WWII period, I am reminded that when the chips are down, this country has come through in the past--and will do so in the future if necessary. With all the conflict of our society, this though reassures me. Thanks for the post about so many who did so much to help.