No Training, No Credentials, Just Determination

Tags: British Citizen Creates a Way to Save Lives 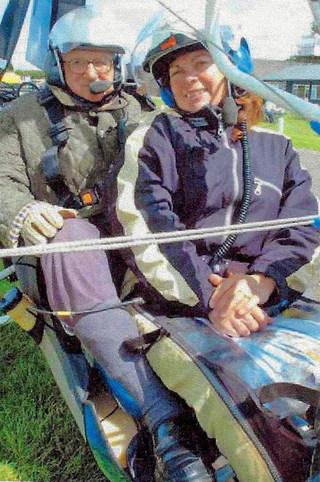 Nicholas Winton celebrates his 98th birthday by taking a spin in a micro-lite aircraft a with one of his Czech "granddaughters."
In 1938, a 29-year-old stockbroker left London to spend his two-week vacation in Prague, Czechoslovakia. But he had no plans to take it easy. Hitler’s persecution of Jewish people was common knowledge. Nicholas Winton knew there were thousands of Jewish families in displaced-persons camps near Prague who were desperate to flee the country before the Germans would march in unopposed due to the Munich Agreement. He had no training, no government credentials, nothing but determination. “I always thought if something is not impossible there must be a way of doing it,” he said on an April 27, 2014, “60 Minute” broadcast on CBS. http://www.cbsnews.com/news/saving-the-children-on-eve-of-world-war-11-60-minutes/

He visited the camps, asked questions and set up shop in his Prague hotel room, asking around for people who wanted to send their children to safety in England. He was quickly inundated with requests for help. At the end of his two-weeks, he took a list containing hundreds of names back to London and appealed to the British government to take in the children. The government agreed, if he found people to adopt them. He circulated photos and found volunteers. Twenty children left Prague by train in March, the day before Hitler’s forces marched in. But it was all taking too much time. He got a printing press and began forging documents. He bribed some bureaucrats. The Germans let seven trainloads of children carrying over 600 children, leave Prague. (They let them go; they wanted to cleanse Europe of Jews). An eighth train of 250 loaded. But on September 3, 1939, Britain declared war on Germany. The eighth train was disallowed. At least 77,300 Czechoslovakians, evidently including Winton's 8th trainload,were eventually killed in Auschwitz.

Nicholas Winton had rescued 669 children. He volunteered with an Red Cross ambulance unit; he trained pilots for the Royal Air Force. He had a family and went on with his life. It was 1988 before word of his amazing accomplishment got out and the BBC aired a program that honored Winton. The audience was composed of some the children he had rescued, now grown. They learned for the first time who had saved them. A documentary, The Power of Good, was made. In 2003, Queen Elizabeth knighted him. Why did he keep his humanitarian accomplishment secret? “I didn’t really keep it secret, I just didn’t talk about it,” he said. He celebrated his 98th birthday with a flight in a micro-lite aircraft. He shakes his head when told his 669 children and their descendants now number 15,000. “That’s a terrible responsibility, isn't it?” he says with a wry smile. "But I'm not much interested in the past...Nobody is concentrated on the present and future." Perhaps with the exception of Nicholas Winton. He works for the mentally handicapped. He builds homes for the elderly. But he doesn't plan to go to one himself. He's only 104.

Footnote: Sad to say, in 1939, Winton also wrote to U.S. President Franklin D. Roosevelt and asked if the United States would take in some of the Jewish children. The answer, from a mid-level bureaucrat in the U.S. Embassy in London, was. “The United States is unable to help.” Read More
Be the first to comment