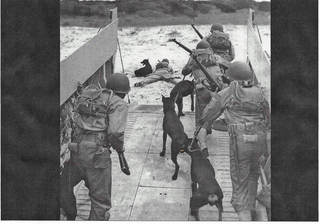 Dogs continue to serve with American Special Operations Forces (SOF) today. Over 2,000 serve around the world, 600 in combat. In 1994, a war dog memorial was erected in the War Dog Cemetery on Guam to honor dogs who fought in the South Pacific. In 2013, a life-size bronze statue of a service dog was dedicated to honor all SOF dogs in service. It stands, surrounded by pavers engraved with information about each dog that gave its life while serving, at the Airborne and Special Operations Museum in Fayetteville, NC, hear Fort Bragg.