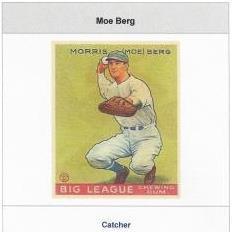 For more information consult The Catcher Was a Spy by Nicolas Dawidoff.