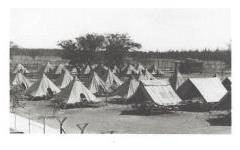 Internee tents at Sand Island shortly after the camp opened in December, 1941. Photo courtesy of U.S. Army Museum of Hawaii.
Fear of people with Japanese-American blood built quickly on the west coast of the U.S. Mainland after the Japanese bombed Pear Harbor, but it was instantaneous on the islands of Hawaii. In fact, influential leaders of the Japanese-American community were arrested and detained within 48 hours. Priests, teachers, newspaper editors, and officers of civic organizations were kept in local jails until temporary camps could be built on Kaua’i, Maui, the Big Island, and on isolated, bridge-less, Sand Island in Pearl Harbor. A handful of women and some 100 Germans and Italians were included in the dragnet. In many cases, their families had no idea where they’d been taken – or if they were alive.

None of them was accused or convicted of any crime. Yet most of them were detained for the duration of the war. One camp was in Honouliuli Gulch on O’ahu. Twenty-seven-foot wooden guard towers, topped with machine guns, interrupted the long, double barbed-wire fences. Army tents provided cover and cots served as beds until barracks could be erected. Among the prominent internees were Thomas T. Sakakihara, a Territorial Representative in the U. S. Congress, and Sanji Abe, elected to serve as Territorial Senator in 1940. He attended one session before being interned in 1942.

In February of 1942, internees began to be transferred to camps on the Mainland and, given the choice, over 1,000 wives and children joined them there. New detentions continued throughout the war, keeping the Japanese-American community in fear; Japanese language, clothing and customs disappeared as pride in their heritage evaporated. Eventually 1,200 to 1,400 men and 1,000 of their family members were detained. Another 1,000 local Japanese were not interned but were denied access to their land during the war, a fact little-known until r the Civil Liberties Act of 1988 provided internees with an apology from the U. S . Government and reparations of $20,000 each.

At that time, the Japanese Cultural Center of Hawaii responded to requests for information about the camps with research of the camp sites, and the U. S. Congress and Hawaiian governments have appropriated funds for further research, preservation, and memorializing the internees’ story. A folder of resource material was distributed to every public high school in the state in 2007. An extensive web site debuted in 2009 with the goal of making the Honouliuli site a public historical park where the internees' story can be shared with future generations. See www.hawaiiinternment.org/history-of-internment