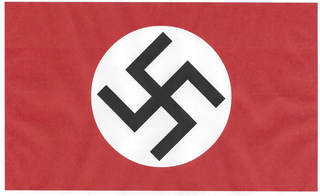 Sadly, there are those who continue to follow this symbol of hatred which has brought only death and destruction to the world.
On April 13, 2014, a 69-year-old physician and his 14-year-old grandson were shot down as they got out of their car in the Jewish Community Center of Greater Kansas City’s parking lot. Moments later, a 53-year-old mother of two was gunned down outside a Jewish retirement complex.

William Lewis Corporon and teen-ager Reat Griffin Underwood were Methodists by faith. Terri LaManno was an occupational therapist and a Catholic. But to shooter Frazier Glenn Cross they were condemned by association with Jews. Eighty-plus years after Adolph Hitler began spreading his poison against the Jewish people, Cross is bent on carrying out the Führer’s evil intent.

In my book, Not to be Forgiven, 11-year-old Sis realizes there are differences between the German prisoners of war in the Hiram’s Spring camp, but she cannot conceive the depth of evil the Lager-Gestapo represents. It took U.S. POW camp commanders quite some time to understand that German soldiers and Nazi officers were very different beings. While the average German soldier was grateful to be out of the fighting, warm and well fed, the Nazi SS officers who arrived in the spring of 1943 were determined Hitler would still win the war.

As was common military practice, most American POW camp commanders left camp discipline to the German officers. But in 1943, most of those officers were inveterate Nazis. They held Kangaroo Courts at night, and terrorized and brutalized prisoners who were too helpful to Americans. One POW named Kraus was caught singing American songs; he was beaten with spiked clubs and died the next cay. Others were made to appear they had committed suicide.

Eventually word of the atrocities got out and the violent Lager Gestapo were segregated to special camps. For more complete information, visit www.theincident.com/index.htm and click on “German POWs in America” or consult Arnold Kramer’s, Nazi Prisoners of War in America, Stein and Day, 1979.”

Kansas shooter Cross, who has been active in White Supremacy for decades, and who has already served three years in a federal prison, is jailed and awaiting charges. He is not alone. Wikipedia lists twenty white supremacist, racist organizations in the United States at the current time. As philosopher George Santayana wrote, "Those who cannot remember the past are condemned to repeat it." We need not only remember, we need to bear witness to the surpassing evil of Hitler's legacy.

We do, indeed need to remember. Your book helps in that effort. Thanks for the history lessons you are providing. I keep learning things, like the POW camp situation, I never knew before.

Nancy, thanks for bringing this to further attention... we live in dangerous times.

The more things change, the more they stay the same. Unfortunately.

So sad to see history repeat itself. Do hope your book will be included as reading in education system, that you can help others learn from history.