Jeepers, it's a Jeep 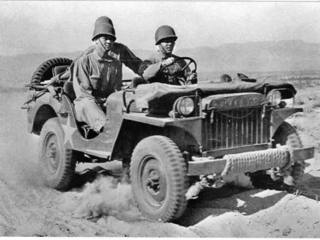 The Jeep - the workhorse of World War II.
Jeepers, it’s a Jeep

Does it seem to you the Jeep has been around forever? Actually, it is into its eighth decade, although people who remember seeing their first Jeep believe it first appeared during World War II.

As it happens, its beginnings surfaced in World War I, as the U.S. Army sought a reliable command vehicle for scouting and reconnaissance. The mechanics who tested such experimental equipment, referred to this new car/truck as a GP, for General Purpose vehicle. Some people believe that "Jeep" came from pronouncing those two letters rapidly. Others find that idea far-fetched.

Whoever is right, strangely enough, the American public first saw the word Jeep in the "Popeye, the Sailor Man" comic strip. Popeye was one of the most popular Sunday comic strips in the country in the thirties, and in 1936 artist E. C. Segar gave Popeye a new companion named Eugene the Jeep, according to Yahoo Answers. He was a pet for the sailor man with the gigantic forearms, a magical, mysterious animal with supernatural abilities who moved between a three-dimensional and a four-dimensional existence. He could not talk except to say “Jeep,” which became his name.

Like many cartoon characters of the time, Popeye joined the service in 1941, and for the first time donned an all-white sailor uniform. The secret of his strength came in a can -- spinach, which he swallowed in a gulp. “I’s strong to the finish, ‘cause I eats my spinach,“ he sang in in one of those ditties that once in your head has a hard time finding its way out. Hopefully, kids copied his nutritional advice and not his grammar. He fought bad man Bluto for the affections of the flighty Olive Oyl and gave a hard-pressed population a few chuckles.

According to Wikipedia, the vehicle produced in a rush by Ford and Willys to army specifications for a light, four-wheel drive, maneuverable car/truck with a fold-down windshield made quite an impression on soldiers at the time, so much so that they informally named it after Eugene the Jeep, because it was "small, able to move between dimensions and could solve seemingly impossible problems."

In early 1941, a reporter for the Washington Daily News, covering a PR stunt to introduce the vehicle to the public, needed to describe its ability to drive up the steps of the US Capitol. She asked the test driver what to call it. He had worked with GIs and heard them calling it a Jeep. He passed that along. On February 20, the country was introduced to the Army’s newest fighting vehicle, using the GI's name - the Jeep. Americans loved it and have embraced it in various forms ever since.
1 Comments

Such an informative article. When I was growing up on our family farm in SE Colorado, I learned, at the age of 12 years, to drive on a jeep which my father had acquired. He also, used the jeep to pull the hay bailer, having taken off the doors but retaining the overhead canopy, it was ideal for him to watch over his right shoulder as the windrow was bailed up.