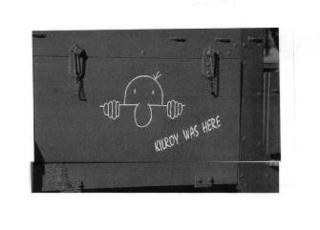 It tickled the funny bones of thousands of troops who saw it when they shipped out to Europe or the South Pacific. They took to thus-branding wherever local they landed on, claiming the mystery man had been there first! Eventually the Statue of Liberty, top of Mount Everest, and even an outhouse used exclusively by Stalin, Churchill and Roosevelt bore the graffiti. Evidently, Kilroy even had reached outer space. The dust of the moon bears the words, "KILROY WAS HERE. The tradition lives on....
2 Comments